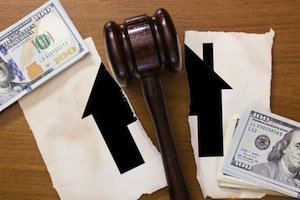 In California, the law differentiates between community property and separate property when it comes to the division of marital assets. Deciding what qualifies as community property can be difficult, especially if a couple was separated for a long period of time before divorcing, or if one spouse did not immediately move out of a shared residence. A recent court decision has clarified some ambiguities in the relevant statutory language that will help streamline the division of property in California divorce proceedings.

Keith Xavier Davis and Sheryl Jones Davis were married in 1993 and had two children, born in 1995 and 1999. Soon after the birth of their second child, the couple ceased sexual relations, and, at some point between 2001 and 2004, stopped sharing a bedroom. From the beginning of their marriage, the couple had maintained a joint bank account. In 2001, Mr. Davis opened a separate account, and in 2003, Ms. Davis reactivated her own bank account, although Mr. Davis continued to contribute a set sum to the joint account for household expenses.

In June 2006, Ms. Davis removed her husband’s name from her credit card and returned his cards to him. The parties continued to live in the same residence, but Ms. Davis filed for dissolution in December 2008. In her petition, Ms. Davis listed the date of separation as June 2, 2006, while her husband’s response noted the date as July 1, 2011. Ms. Davis did not move out until July 2011. At trial, the court ruled that the date of separation was June 1, 2006, and the Court of Appeal affirmed.

In California, prior to determining the division of property in a divorce proceeding, a court must identify which assets are community property and which are separate property. Community property is all property acquired by the spouses during the marriage and is to be divided equitably upon divorce. An exception exists for the earnings of a spouse while he or she lived separate and apart from the other spouse. In such instances, the property will be considered separate, and need not undergo division.

In Davis v. Davis, the Court addressed the meaning of “separate and apart,” and whether that standard could be satisfied if a couple continued to live in the same home, but considered themselves separated.

After reviewing the language of the statute, as well as prior case law, the Court ruled that the legislature intended the phrase “separate and apart” to require both separate residences and an intent to end the marital relationship. According to the Court, this subjective intent to end the relationship must be evidenced by conduct that reflects a complete and final break in the marriage. Residing in separate homes is an indispensable threshold requirement to indicate such a severing of the relationship. Physical separation is thus a requirement for a finding that spouses are living separate and apart.

Although Mr. and Ms. Davis ceased living as husband and wife in many ways, the fact that they continued to live together in the same residence barred them from designating some portions of the marital property as separate, and beyond division.

If you are considering divorce and have questions about how your marital property will be divided, please contact a skilled San Jose family law lawyer at The Law Offices of Steven E. Springer at 408-779-4700 for a free consultation, in Morgan Hill, San Jose or Fremont.