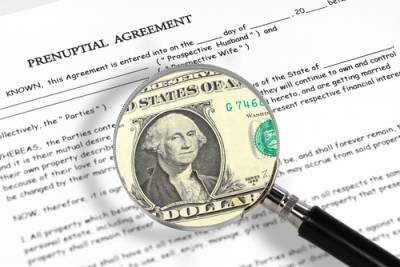 Divorce is not a term many newly engaged couples want to think about. Most couples go into marriage believing it is forever. Even in the traditional vows, you state until “death do us part.” However, the numbers are in and the statistics show that not all marriages last forever as much as we would like them to. In a large number of those marriages, the two individuals are making two different amounts of income. For others, both parties have substantial assets. This is where a prenuptial or a postnuptial agreement may be a wise financial decision. In the event of a divorce without an agreement, the state of California defines what will happen between the separating parties. This agreement will allow you to dictate your own terms for your hard earned money.

In the state of California, the official name for a prenuptial agreement is a premarital agreement. This is a written contract that sets out the terms of possession of financial assets in the event of a divorce. It must be drawn up during the engagement period and the papers may not be signed for seven days after the agreement is delivered. A premarital agreement only covers financial issues including current and future earnings. You are unable to put a clause in about child care or custody. Also, marital obligations are not permitted or enforced, such as frequency of sexual relations or penalties for adultery.

A premarital agreement is only valid if it meets certain qualifications. In section 1615 of California’s Uniform Premarital Agreement Act, this includes anything that the court deems relevant. However, the act outlines general guidelines:

If during a divorce, a party can prove that all of these are not met, then the court may opt to void the agreement. Therefore, it is of the utmost importance that all guidelines are satisfied.

In the state of California, there is a lengthy list of exemptions for the validity of a premarital or a postnuptial agreement. Having a skilled San Jose family law attorney on your side will help you have peace of mind that if something should happen to your marriage, your agreement will be upheld. A divorce is stressful enough without worrying about your finances on top of it all. If you are in the Morgan Hill, Fremont, or San Jose, CA area and would like a free consultation with an experienced attorney, please call us at 408-779-4700 for a free consultation.